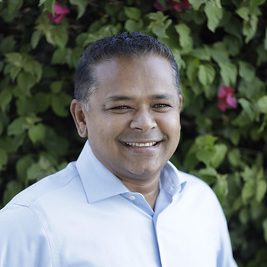 Al Jabbar received a B.A. in marketing from California State University, Fullerton, before earning his Master of Public Administration from California State University, Long Beach [1]. Jabbar has served as the President of Anaheim Union High School District since 2013, and has worked as Deputy Chief of Staff for the Office of Orange County Supervisor Doug Chaffee for three years [2]. He previously served on the Anaheim Cultural & Heritage Commission, as a board member for the Orange County Employees Association, and as the President of the Sri Lanka Muslim Association of California. He has also worked as a Manager for the Orange County Health Care Agency. Jabbar was born and raised in Sri Lanka, before moving to Orange County as a teenager and is the first Sri Lankan-American to hold a position of public office in the United States [1].