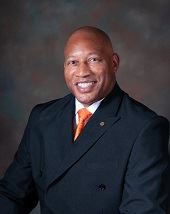 Jones is a US Army Veteran, and he attended boot camp outside St. Louis. He was a Promotions Manager/NIE Coordinator at Danville Register & Bee from 1981-1999, and he was Director of Facilities for Averett University from 1999-2016. He is former Director of Maintenance and Operations for Danville Public Schools [2, 3, 4, 7, 8].

Jones was appointed by the City Council to the school board in 2004 before Danville made the change to an elected school board. In 2006, Jones was drawn out of a lottery to give up his seat and sought election in the first school board vote, retaining his seat, and continued to serve on the school board until 2010 [2, 3, 11].

Jones is Founder and President of One Accord Unlimited, Inc., owner of JKLIPPERZ Barbershop, a Commissioner for Danville Redevelopment and Housing Authority, on the Board of Directors for Smart Beginnings and College Bonanza, a Royal Mason at Danville Royal Lodge #104, a member of American Legion Post 29, and a former member of the BB&T Advisory Board. In February 2022, he received the Humanitarian Award from the Danville chapter of the NAACP [3].