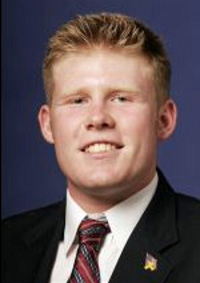 Andrew Giuliani is a lifelong New Yorker who was born and raised in Manhattan. He achieved academic All-ACC honors at Duke University before graduating in 2009 and then turning professional in golf. During that time, Andrew interned in finance and real estate at CapRok Capital, Brownstone Investment Group, and Jones Lang Lasalle. In 2016, Andrew volunteered on the Trump Campaign in surrogate relations, traveling to the Republican and Democrat National Conventions and all three Presidential debates. He then joined the Trump administration as Associate Director of the Office of Public Liaison in 2017. In 2019, he was promoted to Special Assistant to the President. His role consisted of working with high-level business leaders and CEOs to help President Trump and his Cabinet Secretaries craft policy, specifically including the 2017 tax cuts, the deregulation of businesses of all sizes, and was proud of his work on the Opioid task force.

After leaving the White House, Andrew worked as an on-air contributor and political analyst for Newsmax Television. He is currently on the board of the United States Holocaust Museum and has been involved in helping Tunnel 2 Towers, Heart of a Lion Foundation, The First Tee, City Meals on Wheels, Leukemia & Lymphoma Society, The Maurer Foundation, and United Cerebral Palsy.