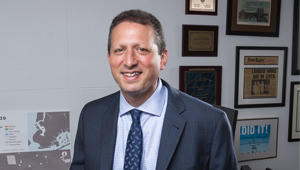 Lander was born in Missouri and was raised in St. Louis. Lander received his bachelor’s degree from the University of Chicago, his master’s degree in anthropology from University College London, and his master’s degree in urban planning from the Pratt Institute. Lander has previously worked as a community planner and housing advocate and was the director of the Pratt Center for Community Development and the Fifth Avenue Committee. Lander was elected to represent New York City’s 39th district in the City Council in 2009 and was reelected in 2013. Lander co-founded the Council’s Progressive Caucus and currently serves as the Deputy leader of Policy.