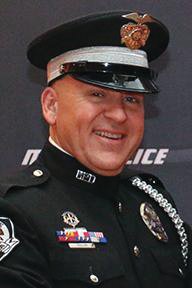 Bryan Soller graduated from Northern Arizona University with a Masters in Educational Leadership. He has served with the Mesa Police Department since 1995 [1]. He is the president of the Arizona State Fraternal Order of Police [2]. Soller has served as the operation lieutenant in charge of all law enforcement operations at the Phoenix Mesa Gateway Airport. Soller is involved with the National Rifle Association, the Arizona Fallen Officer Memorial Board, and the Arizona Regional Community Policing Institute. He also participated in organizations such as City of Mesa Homeless Initiative, Community Spirit, Fuel of Dreams, Special Olympics, and 100 Club of Arizona [5].