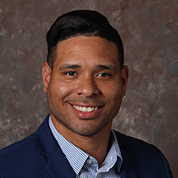 “Mr. Del Palacio has been on the Tolleson Union High School District Governing Board since 2015 and was re-elected as Vice President on January 10, 2017. He is a Human Services graduate of Rio Salado Community College, and obtained a Constitution Law Certificate from Yale University. In 2015, Mr. Del Palacio was elected Pacific Regional Director for the National Black Council of the National School Board Association.  He represents schools, students, and Governing Board members in the Pacific region.  Beginning in 2012, Mr. Del Palacio contributed as a community organizer and worked with members of the community to register voters for upcoming elections. Community involvement is very important to Mr. Del Palacio. He is the founder of PHX United, which organizes community service programs for at-risk youth. Mr. Del Palacio believes that every kid deserves access to a quality education, and he knew that becoming a governing board member would empower him to achieve his goal. As a member of the TUHSD team, Mr. Del Palacio is looking forward to optimizing learning for all.” [2]