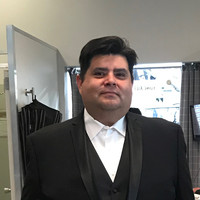 Dick Lopez was raised in Anaheim, where he has lived for 43 years. He earned a postsecondary degree in biology and chemistry before attaining his master’s degree in management. Lopez has worked at restaurants, an air quality research laboratory, the Orange County Probation Department, and most recently as a water systems operator for the City of Anaheim. In this position, which he has worked since 2003, Lopez helps to maintain the cleanliness of Anaheim’s public drinking water [1, 2, 3].