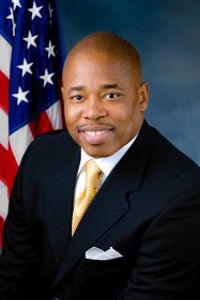 Adams was born and raised in Brooklyn, NY. He got his start in politics after serving in the NYPD for 22 years, co-founding “100 Blacks in Law Enforcement Who Care”, a group that spoke out against police brutality from within the force, as he was beaten by cops himself as a teen. In 2006, he was elected to the State Senate and represented the neighborhoods of Crown Heights, Brownsville, and Park Slope for 4 terms. He was elected as Brooklyn Borough President in 2013 and was re-elected in 2017.