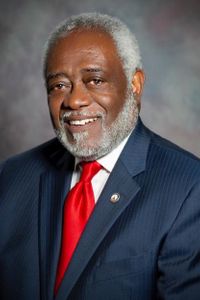 Floyd Griffin was born in Milledgeville, Georgia. A retired US Army Colonel, he has an Associate of Science degree in funeral service, Bachelor of Science degree in building construction, and Masters in contract procurement and management. He previously served as the mayor of Milledgeville in 2002 and in the Georgia state senate from 1994 to 1998. Griffin ran for House of Representatives in the Georgia election in 2016 and for senator in the Georgia election in 2010, and lost both elections.