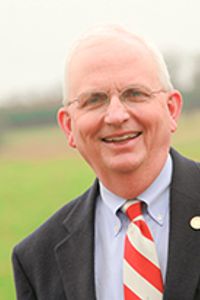 Gary Black graduated with a Bachelor’s Degree from the University of Georgia in agriculture education. He began his career with the Georgia Farm Bureau, leading the young farmer development program. He is deeply passionate about agriculture, having served in the industry for 40 years.
Prior to becoming the Georgia Commissioner of Agriculture, Black spent 21 years as president of the Georgia Agribusiness Council. He currently serves on advisory committees for the United States Department of Agriculture, Environmental Protection Agency and the Export Import Bank of the United States. He is currently working to improve innovation in the agricultural field, specifically in jobs, food safety, and technology.