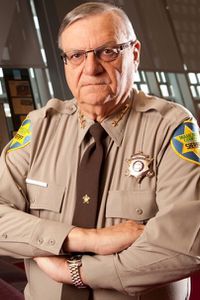 Joe Arpaio served in the U.S. Army from 1950 to 1953. He was is the head of the U.S. Drug Enforcement Administration (DEA) for Arizona and has served as a police officer in Washington, D.C., and Las Vegas [3] He founded the Sheriff Joe Arpaio Action Fund in 2016 to promote conservative ideals [3] In 2017, Joe Arpaio was found guilty of criminal contempt for not obeying an order to not detain people without having reasonable suspicion that they committed a crime. Arpaio was later pardoned in 2017 by then-President Donald Trump [2]. Arpaio previously unsuccessfully ran for Maricopa County Sheriff in 2020 [1

None could be found.