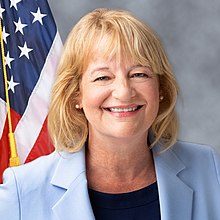 Katrina Foley received a B.A. in English from UCLA and a J.D. from the Seattle University School of Law [7]. She was elected to the Orange County Board of Supervisors in a 2021 special election, representing District 2. She previously served on the Costa Mesa City Council for 14 years, as the first directly elected Mayor of Costa Mesa, and on the Newport Mesa Unified School District Board of Trustees. Foley is the President of the Foley Group, a which provides civil, business, and employment litigation services [4].
She previously served as Board Member for Travel Costa Mesa, Chair of the Coast Community College Measure M Oversight Committee, and as a Director on several regional boards including, the Orange County Women Lawyers Association, Orange County Head Start, Girl Scouts of Orange County, and the Toll Corridor Association. She has two college aged sons [2].