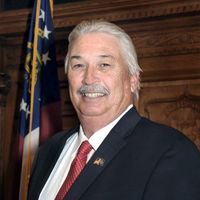 Anderson is currently president of the Columbia County Farm Bureau and previously served as the State Young Farmers Chair. He is a member of the Georgia Cattlemen’s Association and the National Rifle Association. Anderson works as a farmer and owns Anderson Farms, a small businessman [1].