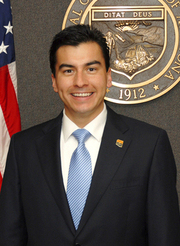 On March 16, 2021, Lopez became the first candidate to announce his campaign for the 2022 Arizona gubernatorial election. In 2001, Lopez served as mayor of Nogales, Arizona, earning the distinction of “America’s youngest mayor”. In December 2003, Lopez was appointed by Arizona Governor Janet Napolitano as the Executive Director of the Arizona-Mexico commission. He also served as senior advisor to Governor Napolitano and later the Director of the Arizona Department of Commerce. Lopez was appointed to serve as the Chief of Staff for united customs and border protections under President Obama. Both of Lopez’s parents are Mexican immigrants. He studied liberal studies and political science at the University of Arizona. Lopez is a licensed pilot.

Lopez has not received any major endorsements yet.