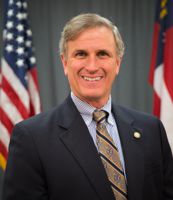 Marty Harbin graduated from Georgia State University in 1977 with a B.B.A. in Management [3]. His previous positions include third and first vice chair of the third congressional district, delegate to the National Republican Convention in Tampa, and Fayette County District Representative. He also worked on Goldwater and Reagan’s presidential campaigns. In 2008, he worked on Huckabee’s Presidential Team.

He founded The Harbin Agency, a business for insurance and investments. Harbin taught Sunday School at FBC Atlanta and serves as a deacon there [1] [3].