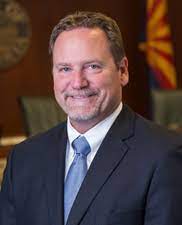 Michael Finn graduated from Arizona State University with a Bachelor’s Degree and from the University of Phoenix with an MBA. Finn was previously the Chief Financial Officer of the Peoria Unified School District [4]. He is also currently a Chief Human Resources Officer for Pueblo Mechanical & Controls [3]. As a  Peoria Councilman, Finn contributed to Peoria being rewarded with an AAA bond rating from Moodys, which is the highest rating [1]. As the Chief Financial Officer of the PUSD, he managed a staff of over 400 people and a budget of $200 million, which he says contributes to the district’s “stellar reputation” [2]. Since January 2020, he has been the Vice Mayor of Peoria [6].