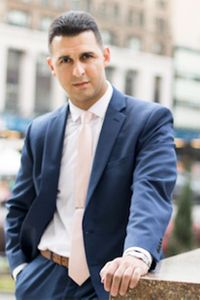 Henry graduated from Montclair State University, received a Master’s degree in International Relations from St. John’s University, and graduated from Touro Law. Henry is a commercial litigation attorney from Astoria and previously represented asylum seekers from China before the Executive Office of Immigration Review. Henry was a judicial intern for The Honorable John M. Czygier, Jr., Suffolk County Surrogate’s Court, and has served as a legal and political analyst for television, radio, news, and political organizations.
Before becoming a lawyer, Henry worked in the mortgage industry. Henry is currently a member of the Federalist Society, and has served the Federalist Society as a law school chapter president and a regional coordinator. He also is a part of multiple Italian American Lawyers associations.