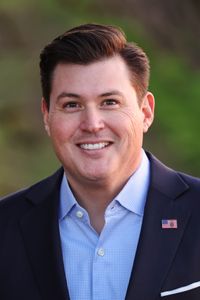 Michael Maher grew up in Tulare, California, and graduated from Tulare Union High School in 2001 before enlisting in the US Navy. He graduated from the US Naval Academy’s Preparatory School, Fresno Pacific University, the FBI Academy in Virginia, and the US Navy’s Nuclear Power School. Maher also attended Oxford University and the John F. Kennedy School of Government at Harvard University.

His professional service includes serving in the US Department of Justice as a Special Agent of the FBI in the National Security Division. He was the Counterproliferation Coordinator for the LA Field Office, and he also worked with police, fire and hazmat teams, and sheriffs to support the criminal division. He briefly worked with the Fresno FBI resident agency and received the ODNI Award from the Director of National Intelligence. In aviation, Maher worked in the construction industry for over 5 years and was the President and CEO of an international luxury air charter company.