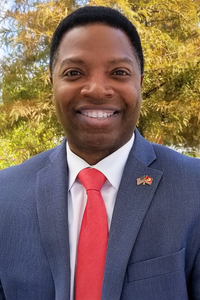 Michael Owens served 8 years as a marine. He then earned an undergraduate degree in computer and electronic technology from North Carolina A&T State university in 1992 and a D.B.A in business administration from the Georgia Institute of Technology in 2006. Owens worked as a cybersecurity expert and has consulted for a number of large companies around the world including serving as the U.S Information Security Officer of Equifax. Following two Russian cyber attacks in 2017, Owens was selected to speak at the first Global Cybersecurity Summit in Kyiv.