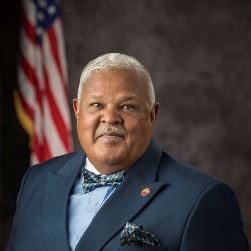 Paul J. Battle received a bachelor’s degree in Interdisciplinary Studies from Norfolk State University. He has worked with the Parks and Recreation Department, Police Department, Behavioral Health Care Services, and Portsmouth Redevelopment and Housing Authority, and he was a Deputy from the Sheriff’s Department. Battle currently owns and operates Tranquility Manor Adult Residential Care Services and Battle Music & Entertainment [1, 2].

Battle is a member of the Mount Hermon Association, Church in Community Action, the Eureka Men’s Club, the M.L.K Leadership Steering Committee, the Portsmouth Chapter of the NAACP, the Portsmouth Chapter of the Norfolk State University Alumni Association, the Norfolk State University Board of Social Work, the Olympiad Sports Club, the I.C. Norcom Alumni Association, the Wesley Community Center Board, and the Portsmouth Democratic Committee. He is the former president of the Cavalier Manor Little League Association and is an Inductee of the I.C. Norcom Athletic Hall of Fame. Battle also supports youth sports in Portsmouth and purchases uniforms, equipment, trophies and travel to state tournaments [1, 2].
His accomplishments include helping create the “Drug Elimination Grant”, which added 15 police officers to the police department, helping create the “Empowerment Zone Grant” which funded the infrastructure for Victory Crossing and added businesses to the tax base, and writing the main portion to the “Hope 6 Grant” while working with the Portsmouth Redevelopment and Housing Authority. The Hope 6 Grant concerned the demolition and revitalization of Jeffrey Wilson and Ida Barbour. The revitalization added 300+ families to the tax base for the city and allowed for around 280 to become first-time homebuyers [4].