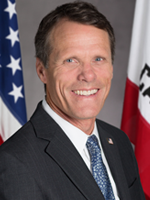 Ted Gaines graduated from Lewis & Clark College with a BA in Business Administration [4]. Gaines has represented District 1 on the CA Board of Equalization since 2019. He served in the CA State Assembly from 2006-2011 and the State Senate from 2011-2019. As a State Senator, he was a member of the committees on Insurance, Government Organization, Transportation and Housing, and Emergency Management. Gaines was appointed to the Roseville Planning Commission in 1997 and was elected to the Placer County Board of Supervisors in 2000 [1]. He currently owns Gaines Insurance Agency and previously owned Point West Insurance of Sacramento [3]. Gaines and his wife currently live in El Dorado County [4]. They have 6 children and 7 grandchildren [1].