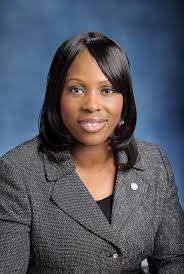 Gibson is a native New Yorker who has attended the University at Albany and who joined the New York State Assembly Intern Program while she was a student there. Gibson then served as a Legislative Aide and would then rise to the position of District Manager overseeing the Bronx office. Gibson was elected to the New York State Assembly in 2009 to represent the 77th District in the Bronx.