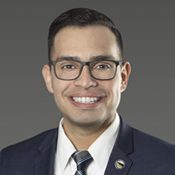 Dr. Yxstian Gutierrez received a B.A. in Human Development from California Babtist University, an M.A. in Education from American InterContinental University, a Doctorate in Education from Northcentral University, and a Certificate of Public Policy in Executive Education from the University of Southern California [2]. Gutierrez has served as the Mayor of Moreno Valley since 2016, and was the city’s first directly elected mayor. He previously served on the Moreno City Council and was appointed Mayor Pro Tem and Mayor [5]. He is a professor in the Special Education Department at National University, Sanford College of Education. He also teaches at Moreno Valley College and has worked as a Special Education Resource Specialist for Moreno Valley Unified School District for 14 years [7]. Gutierrez is a board member for the Renu Hope Foundation, local board member for the U.S. Selective Service, and a 1st Lieutenant (CA) with the 163rd Support Group stationed at March Air Reserve Base [1].